On Saturday, October 10th 2020, in conjunction with the Global Network on Safer Cities (GNSC), Hezues R – noted film director and host of the YouTube panel discussion series, "Real Talk" – and the cast of his upcoming movie, "Suicide Saint", will be part of a milestone event taking place in New York City that promotes the use of film and arts to address the topic of mental health and wellness. 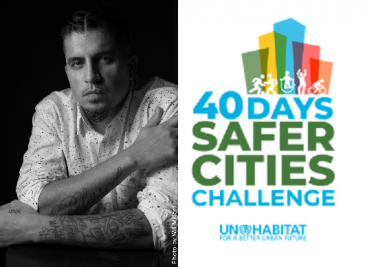 The event is part of the 40 Days Safer Cities Challenge, held yearly by the GNSC, which raises awareness on a worldwide level regarding safety in cities, urban crime prevention and promotes concrete actions by people. This initiative started on September 21st, 2020 – the International Day of Peace – and will conclude on October 31st, 2020, which is World Cities Day. The 40 Days Safer Cities Challenge is the result of the adoption by Member States of the United Nations' system-wide Guidelines on Safer Cities and Human Settlements at the first UN-Habitat Assembly, held last year.  The World Mental Health Day Event on October 10th will be streamed online.

Both mental wellness and safety in cities are issues Hezues R spent years working with communities of color to help bring to the forefront – which he covers in his "Real Talk" roundtable series on YouTube and will be the focus in the film, "Suicide Saint."

"It's a great honor that we have the opportunity to support a groundbreaking and international initiative such as the 40 Day Challenge," says Hezues R. "I am humbled that the UN's Habitat program would recognize our film, 'Suicide Saint', as a world-leading example to create safer cities, significantly through the arts. Social Impact has been the mission of my entire career. Being granted a global stage validates the importance and quality of the work, especially when you have dreams of changing the world."

Hezues R will also be a featured guest on WABC-TV's public affairs series, Here & Now, on Sunday, Oct. 11th 2020 at 12 noon EST, discussing "Suicide Saint" and his work regarding mental health and wellness.

WORLD URBAN CAMPAIGN: JOIN US AT THE WUC Assembly on Tuesday 3 November
2 Nov 2020