This post draws on lessons learned by cities in the Urban Transitions Alliance, an initiative that brings together 12 cities across 3 continents, supporting members in identifying common challenges and co-creating solutions.

According to the Food and Agriculture Organization (FAO), food security exists when all people, at all times, have physical, social and economic access to sufficient, safe and nutritious food which meets their dietary needs and food preferences for an active and healthy life.

For formerly industrial cities that have transitioned away from heavy industry, food insecurity has been a dire problem. Prolonged disinvestment common to former blue collar neighborhoods often means that food insecurity is more significant in these areas. This phenomenon is particularly acute in U.S. cities. As an example, according to Feeding America, one in five Baltimore residents experiences food insecurity.

But these cities are also showing how food systems can be made more equitable and sustainable. Deindustrialization has left industrial legacy cities with large tracts of underutilized land and infrastructure that offer opportunities for local food production, urban agriculture and creative use of post-industrial buildings for activities such as food hubs, processing or incubation space. 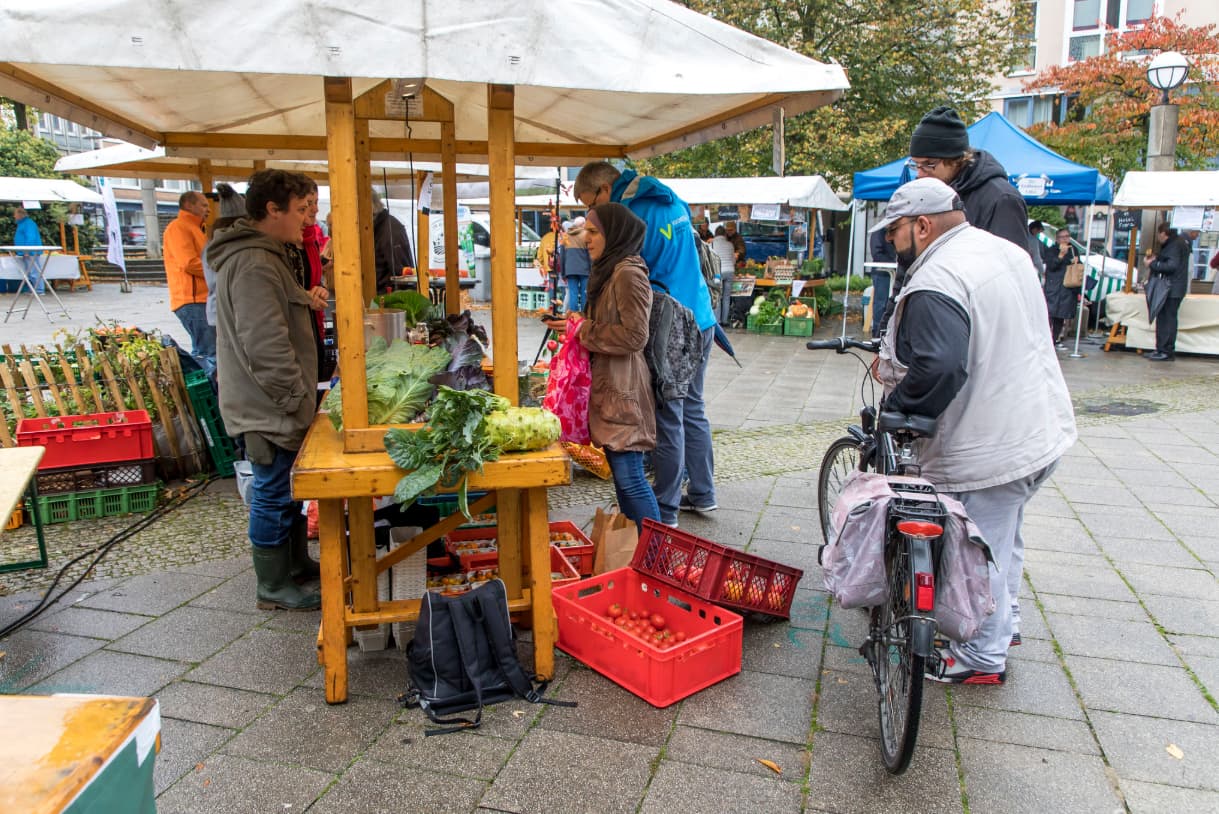 For local governments, taking a food systems approach means looking at the different elements (environment, people, inputs, processes, infrastructures, institutions, etc.) and activities that relate to the production, processing, distribution, preparation and consumption of food, and the outputs of these activities, including socio-economic and environmental outcomes.

Here are eight great ideas from industrial legacy cities that begin to tackle food insecurity systemically and can inspire cities everywhere to improve access to sufficient, safe, healthy and sustainable food for all residents.

As part of its 2018 Food Environment Report, the City of Baltimore developed a methodology to locate Healthy Food Priority Areas using maps of four different data sets. Their Priority Areas represented an intersection of the following:

By combining these four data sets and overlaying them with the city’s zoning code, Baltimore identified residential areas prone to food insecurity.

The full data set is open source and accessible online, with the hope that other cities can draw from these materials to develop similar methodologies and adapt them to the local context. Further indicators to assess the equitability of food systems can be found in the Milan Urban Food Policy Pact Monitoring Framework.

With a better understanding of the geographic and socio-economic factors that drive food insecurity, cities can determine which neighborhoods to prioritize. Local governments can then design policy solutions that address food security at a systems level.

Indicator frameworks like Baltimore’s are a good starting point for policy change, but are most powerful when combined with resident experiences. Participatory processes that build on civil society initiatives and engage a wide range of actors can help ensure the effective integration of the needs of disadvantaged communities into food policy and planning.

Both proximity to and quality of food retail stores influence residents’ ability to purchase healthy food. In order to retain and attract retail stores, Baltimore passed and implemented a new tax credit for supermarkets locating or renovating in “Grocery Incentive Areas” in 2016, which resulted in the construction of one new supermarket serving East Baltimore, previously considered a Healthy Food Priority Area.

Urban agriculture is another example of food sources particularly relevant in industrial legacy cities as it constitutes an opportunity to put vacant lands back into productive use and foster neighborhood redevelopment. Launched in 2015, Pittsburgh’s Vacant Lot Toolkit includes a streamlined process to temporarily and permanently reuse vacant lots for food, flower, or rain gardens. With this toolkit, residents learn how to gain legal access to vacant lots, include their neighbors and other community members, develop a plan and find resources available through local non-profits. To date, 130 vacant lots have been repurposed by residents.

Similarly, Essen (Germany) has been supporting the development of community gardens through its Green Capital office and the citizen-led initiative Transition Town – Essen Im Wandel.

In Cincinnati, grassroots efforts are underway to bring vacant properties in the Northside community back into use. For the Apple Street Market, the city acquired a vacant building in order to lease it to a community-owned food cooperative. The City Council funding also helped cover the property’s environmental remediation and construction of the market.

Not all communities can support a full-service supermarket, or a group of stores that fully serve a community’s food needs, forcing many residents to commute to buy groceries. To make public transit more conducive to food shopping, the City of Baltimore partnered with the Central Maryland Transit Alliance to conduct a food access analysis of the impact of the planned BaltimoreLink bus system. The city then advocated for improvements to bus routes based on these findings.

Cincinnati is testing delivery services to bring affordable groceries into neighborhoods that retailers consider unreachable. The pilot project, called Freshmen Cincy, is a community delivery service that offers grocery pickup to Avondale community residents who receive state nutrition assistance. Residents can call or text a “Freshmen ambassador” in their community to get a delivery.

Nutrition assistance programs are an important source of food for people and families with low incomes. They are both a social safety net and economic drivers for food retail in cities. As such, they can be used to direct purchase towards healthier options.

In Cincinnati, Produce Perks Midwest helps underserved communities get access to healthy fruits and vegetables by providing a dollar for dollar match for every dollar spent on produce.

In Pittsburgh, 412 Food Rescue prevents good food from entering the waste streams by redirecting it
to nonprofits that serve those who are food insecure. To distribute surplus food, the initiative partners with over 500 nonprofits in the Greater Pittsburgh region, including housing agencies, subsidized daycare centers, senior centers, after-school programs and community centers. In 2016, 412 Food Rescue launched the app “Food Rescue Hero” through which individuals can volunteer to complete food rescues. The initiative has been very successful so far, with over 2000 individuals having volunteered since the launch.

While food donation on its own isn’t sufficient to address food insecurity, it does play a role in meeting short-term food insecurity needs while curtailing the waste of food. Cities interested in expanding this offering should check out the Natural Resources Defense Council’s methodology for local governments to assess the untapped potential for increased food donations in their city.

To address food insecurity holistically, local governments must confront poverty challenges. One of the avenues is to use a city’s food strategy as a tool to generate employment opportunities in food insecure areas.

A core component of Baltimore’s food policy is its Food Waste & Recovery Strategy. The strategy supports the creation of composting locations led by community partners to increase opportunities for youth employment or other workforce development. Research has shown that on a per-ton basis, composting sustains two to four times the number of jobs as landfill or incinerator disposal.

A municipal food strategy that looks at the different elements of food management – including primary production, distribution, processing, marketing and recovery – is essential to identify intervention points that can create inclusive employment opportunities locally.

None of the ideas outlined above can completely rectify the underlying causes of poverty that drive hunger and that are rooted in the socio-economic context of a city. However, these measures play an essential role in ensuring near-term food availability for vulnerable populations. They also support the design of sustainable food systems that are more resilient to environmental and social changes.

In many urban areas food security and nutrition objectives are challenged by complex factors such as spatial and socio-economic inequalities, unemployment, the physical distance between food production areas and consumers, rapid changes in food demand and consumption patterns as well as global dynamics such as volatile food prices and climate shocks.

As such, food security and nutrition are multidimensional topics spanning a wide range of policy domains such as agriculture, public health, social protection, employment or biodiversity protection. While local governments may not have direct agency over the full spectrum of food insecurity drivers, a food systems approach offers a relevant framework to design integrated food solutions at the local level.

As demonstrated by the Urban Transitions Alliance cities, a food systems approach is essential to ensure municipal governments address food security through multiple avenues and involve the many actors and activities that influence access to nutritious food locally.

Local governments in need of support for advancing food systems policy and planning can contact the ICLEI-RUAF CITYFOOD Network (cityfood@iclei.org). Bringing together 30 local governments globally, the network serves as a platform for peer-exchange, capacity building, and the promotion of policies and instruments for advancing sustainable and inclusive food systems. Learn more about how to join: CITYFOOD Network – Invitation to local and regional governments.

COVID19 - Urban Thinkers Campus - Facing Urban Vulnerabilities in the COVID-19 Crisis: What is needed to address hot spots and build resilience
4 May 2020